So thought I would share with you my experience of the Norwich game.

It was a very surreal experience for me in particular. I mean I’ve been to the majority of home games this season but this experience struck a cord as I was positioned in the stadium somewhere I had not experienced before

My favourite position at games is behind the goal, you can’t beat seeing the ball hit the back of the net whilst in the north bank (when scored by arsenal) however the last few games I attended was whilst in the clock end. Maybe a bit of a jinx since our last few results haven’t swung our way.

I hate upper tier seats, love the view but prefer to be closer to action (don’t get me started on price); anyway on this occasion for the Norwich game I had purchased a ticket in the clock lower. What I didn’t notice when I bought ticket was my position near the away fans

As I walked in to find my seat I noticed how close in proximity the Norwich fans were, as I searched for my seat number they became closer and closer. Too bloody close! My seat was directly next to the buggers. Separated on my right by a set of stairs and a steward. “This will be interesting” It’s always nice to give it to any away fans that visit the emirates but to experience it when fans are in earshot is a completely different kettle of fish. I could actually put a face to the voices; I was in eyeshot, earshot close enough to lash a programme in their face.

Seriously anyone who has a season ticket positioned this close either has amazing restraint or loves a good ol’ slanging match and probably a fight too.

Of course we don’t lose very often at emirates so we would normally get one over the away fans more often than not. However, when you do lose or a result is against the arsenal the last thing you need is an away fan bellowing into your ear. There’s nowhere to turn your face.Normally when I’ve been in the stadium my block would pick out from afar a fan in the away section that stood out to berate and wind up. 9 times out of 10 it would be the fat bastard fan. They always seem to be most animated and easiest target.

The game had a lot of ups and downs we scored in the first minute, I was happy, I cheered, I sang while the Norwich fans were silent and wondering if this will be a mauling.

Apparently not, as Norwich proceeded to take the game to us. We took our foot off the pedal and were punished for it. First they equalised and all of a sudden those Norwich fans voices were getting picked up on my radar. Then they went 2-1 up and boy could I hear them. Every snide comment, every song, every chant. We looked like conceding every time they attacked and its then it was hard to make any noise. I admit I went silent, followed type as I was trying to get my head around what was going on.A few comments of being the library came up.

Another thing that didn’t help situation was the constant reminders to sit down. I wasn’t too fussed about sitting down but when you see that they don’t apply the same rule to the away fans it kind of feels like they have one up on us.

There was a funny interaction between an arsenal fan sat next to me and a steward. Went a little like this:

Steward: “can you sit down please” Fan: “I stand when the F**k I want”

Steward: “excuse me?” Fan “fuck off c*nt” Steward: “swear at me one more time and you are out of here”  The fan continued to ramble on but didn’t swear. Then he sat down. The steward went back to his position then the fan muttered “F**king steward was bang out of order”  all this went on to the amusement of the Norwich fans nearby.

I cheered but it was half-hearted. A draw wasn’t enough and I wanted to really give it to those Norwich fans who were constantly chanting ‘Thursday nights Channel 5”

All the comments had got to me but I didn’t want to give it to them until we were actually ahead. We were on top now and a next goal was coming.

Oh how I couldn’t wait to give back. Then the moment came RVP slipped the ball into the back of the net. 3-2 up I went MENTAL! I mean I turned to those fans and gave ‘em a right rollicking. There was some serious tension built up and I let it out.

The look on their faces, “wooo” that felt good. The whole of the clock was so vocal now; I guess I wasn’t the only one that held it in.

What happened next wasn’t part of the plan. There’s a break, from where I’m sitting it seemed best option for Chezzer to come out and close the angle, he half thought and then retreated. Morison lets fly and the ball is in the back of the net.

How the Norwich fans let rip, how the Norwich fans let us know how the last laugh is the best. How I didn’t stage dive into the Norwich fans and take out as many as I could I don’t know. There was no place to hide, stunned but unable to digest what had happened. I got it full barrel from those fans. I’ve never heard so many voices that sound like farmers at the same time. The channel 5 song was back. Also an interesting one about they’d rather have Holt than RVP (ok).  Arsenal then proceeded to test my heart to full capacity. We had about 4 clear-cut chances to score but the ball would not go in. 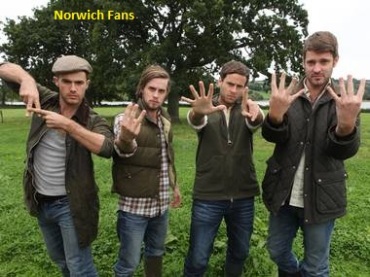 Full time came and I was just sat there in silence, contemplating all the possible scenarios. 3rd place was out of our hands. The farmer voices had won this battle of banter but the war will go on. I’ll be seeing you next season boys.

Not sure if I could sit in that position on a regular basis. And I don’t know how my restraint would be if it was against the likes of Spurs and Chelsea.

I will however make sure I can get in that seat for next season’s encounter with Norwich. I need revenge; I’ll give those buggers channel 5…

Enjoy rest of your day people