Arsenal fans are impatiently waiting for confirmation of the deal for Nuri Sahin. The potential loan deal seems imminent however until anything is announced on the official arsenal website the speculation increases as to what could be delaying the deal. Is there an option to buy clause or isn’t there? Does Mourihno hate Arsene so much he would rather the player go anywhere else? Has Sahin been given a few days to decide where he goes? Whatever the reason we will lap up any rumours that surface and in true Chinese whisper fashion we will hear a completely skewed story from the original source.

I believe the deal will be announced before the week is done, whatever day it’s announced I do not expect the midfielder to be involved in any part of the Stoke game on Sunday. The fans though maybe need an announcement to counter the loss of Alex Song to Barcelona; we are divided in our assessment of whether the sale of the Cameroonian was a big blow or great business. I would have to sit on the fence for this one, on one hand it’s a shame to lose a player who has improved on great levels to make the defensive midfield role his own in the arsenal team, he was at a good age and he added steel to our midfield; on the other hand fans questioned his overall focus of the defensive side of his game and the fact that despite how good he was for us he isn’t irreplaceable.

With news of a deal for Yann Mvilla possibly being revived fans would soon get over the loss of Song. Wenger went as far to admit that he was planning to bring in a midfielder and a defender only for Everton’s new signing Kevin Mirallas a striker claimed he turned down arsenal in favour of a move to Goodison Park. Mr Wenger you crafty soul, you never show your hand, you bluff and you bluff yet we eat up your words like doggy treats. Back to Mirallas I have no idea why his revelation that he turned down arsenal is headline news? Maybe he thinks it looks better on his CV that a snub to arsenal shows what a top player he is. The fact he ended up at Everton maybe shows how much he isn’t such a top player. Rather than trying to improve himself and fight for a place in the starting line up at a top club he settles for starting week in week out at a club where his only threat is Victor Anichebe; Good luck to him and his lack of ambition.

In other news it was revealed that our very own Andre Santos has been a bit of a naughty boy and got himself in trouble with the law. It was alleged in the daily mail that Santos was clocked speeding and driving erratically on the A1 near London Colney. Santos apparently did not stop for the police and it turned into car chase. A statement from the police claimed:

“Shortly after 9.30am on Friday August 17, a 29-year-old man was arrested on suspicion of dangerous driving and failing to stop for police on the A1, near to Junction 22 of the M25.”

“Officers’ attention was drawn to the vehicle due to the manner of its driving.”

Not the ideal event to happen the day before our first game of the season, could that be the reason why he did not feature in the game. I suppose if he was being disciplined for the incident he wouldn’t have been on the bench or the squad at all though that would have raised speculation. It was claimed he was not breathalysed when arrested though at 9.30 on a Friday morning to have any alcohol in his system would spell curtains to his career at arsenal.

Whatever his reason failing to stop for police is a big no no, speeding alone is so common amongst footballers nowadays it doesn’t warrant reporting, a mere slap on the wrist normally covers that; failure to stop and the law enforcement get a bit more serious.

I suppose the hardest thing to get my head around is the fact that Santos is known to be driving this car: 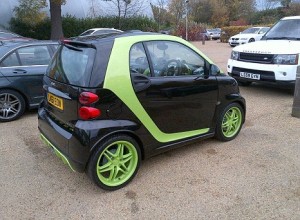 with reports of him driving up to speeds of 130mph I struggle to see it reaching 30mph with Santos big frame driving it.