Absolutely shocking performance last night, Arsenal fans across the land must be united in wondering how we can turn this around. The line up last night included no kids, none of the young raw players we have witnessed in previous rounds. This was the first team out there, pitted against a league two side. There is no excuse to struggle against a side from that level; I know the home fans were up for it and that would of course lift their players but this was our first team out there.

Words cannot describe the embarrassment felt witnessing the game yesterday. On Saturday the win against West Brom was seen as the first step on the long road to recovery; a chance to build back some confidence and momentum and prove the club is still a major force. Well yesterday Bradford City pushed Arsenal back about 20 steps; it is going to take a hell of a lot to restore some pride and dignity to Arsenal’s reputation.

Our once great club is now a laughing-stock; it is hard to defend the events of last night. It may only be penalties but it should never have reached the stage of penalties. Despite the one million and one wake up calls we have already had this season we still have not reacted. Will this spark some soul-searching and a new focus to put things right? Hardly, we will be here again in couple weeks time questioning another defeat. It is a vicious cycle and the January transfer window cannot come quick enough; we need wholesale changes, talking up the quality of the players we have means nothing if they cannot produce the results.

We are a club in turmoil; there is no way to sugar coat it, a high number of players in the squad are just not good enough to take us back to the top. Arsene needs to put his ruthless hat on and wield the axe; he needs to fix the team as soon as possible. We cannot afford to wait until the summer and at the moment Wenger cannot afford any more slip ups. The pressure is on like never before, he lost the backing of even more fans last night after that outcome and at this moment in time I cannot see him lasting the season if things don’t change. 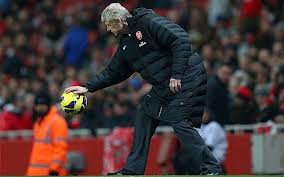 In his defence, he put out a strong team against Bradford and those players who were on the pitch should take most of the blame for the performance and result. They let him down big time, they let the fans down and they let their selves down. I’m not even going to single out players; the usual suspects who the fans ridicule did nothing to prove otherwise. I won’t blame the penalty misses because like I said the game should never have even got to the stage of a shootout. The whole team needs to look long and hard at itself, we cannot paper over the cracks anymore because fan power grows stronger with each poor performance.

The only Arsenal positive I can think of right now if the fact that we are not playing until next Monday so my weekend won’t be spoiled in any way. I will get back to being more positive about Arsenal and their chances for the rest of the season but for now I am sure you are in agreement that this sucks right now.

Try your best to survive the banter from rival fans today.