Cup final day is finally here, the wait is over as the opportunity to lay to rest the trophy-less tag has never been greater. People play down the credibility of the FA cup when compared to earlier years but when your team is in the final try telling the fans involved it has no value and you would be roundly laughed at.

The FA cup holds a special place in the hearts of fans involved, not so much for the losing side at the final whistle but all the same the build up and experience is second to none.

Those fans lucky enough to experience the game at Wembley will have tales to tell their grandchildren in years to come. The limited allocation to the centrepiece makes the experience all the more exclusive and the memories cherished.

The players will be up for it, you always hear foreign players recalling their memories of FA cup games watched on TV in their countries when growing up. No other domestic cup competition around the world holds equal prestige and I’m sure any Arsenal player not involved today will be greatly disappointed.

The keeper situation is a dilemma Arsene Wenger will have to consider carefully. Lukasz Fabianski has not let anyone down in the run up to the final whilst first choice Sczcesny will argue his right as first choice keeper.

Personally I would stick with Fabianski, he is hardly a rookie that would weaken the clubs chances if he was selected. He may be leaving at the end of the season but he accepted the role of cup keeper at the start of the season and has earned his place in the starting line up.

I believe the same situation can be argued in the Giroud/Sanogo debate. The young Frenchman had been preferred in the previous few rounds due to certain indiscretions and a period of poor form from Olivier Giroud but with the return of key midfield players from injury Giroud has certainly found his mojo again.

Sanogo put in shifts when called upon but the lack of that first goal for the club sways for the choice of Giroud up front.

It could be Sagna’s last game for the club, he has been a great servant to the Arsenal and it would be fitting that he signs off with a silverware, something which has eluded him ever since joining.

The rumours of joining Manchester City will taint his legacy but it’s something we can address at a later time, it’s only a rumour for now.

For now it’s all about getting behind the team and cheering them on to victory, for those of you lucky enough to go to Wembley do us proud. I will have to settle for the screening at the Emirates but being surrounded by fellow Gunners fans will make the experience all the more rewarding.

Get down there if you can, 25000 fans are already expected, it could possibly be one hell of a party.

Enjoy the final people.
Please feel free to like the Facebook page for regular updates of the blog.

The home schedule is over for another season at the Emirates, with fourth place secured the only motivation for the Gunners were to get three points on the board to send the Arsenal fans home happy one last time. Of course the FA Cup will be the final thank you (if won) to the fans but as we know the majority won’t have the opportunity to support the team at Wembley.

The football wasn’t the greatest yesterday, the pressure was off after Everton conceded fourth place to Arsenal and even though West Brom tried in the back of their mind they see themselves safe from relegation. Norwich did manage to come away from Stamford bridge with a point as Chelsea’s pathetic end to the season spluttered on however the chances of being overtaken by the canaries still are a very long shot.

Both sets of fans were in a good mood, the weather was sunny and kept the mood jolly. West Brom fans came armed with a variety of beach balls which we’re bouncing around the away end until the stewards got their hands on them.

With fourth placed secured many wondered if most the 1st team would be rested for the game, news filtered through before the match that Abou Diaby was on the bench and Aaron Ramsey would not be involved. I suppose the possibility of wholesale changes would be slim since all week the team would have been set out in training to get the win, the bonus of Everton losing came too late in the day to change all preparation for yesterday’s game. Ramsey was afforded the break which was good however a much weakened team would be expected for the Norwich game.

It would have been nice to see Abou Diaby make an appearance in front of the fans but an injury to Nacho Monreal equated to the final substitution of the day being a forced one. Arsenal’s very own ‘Mr Glass’ is likely to still be around next season, hopefully for a lot longer than he managed this season. The same can’t be said for Kim Kallstrom, he will be returning to his parent club once his contract runs out. After all the kerfuffle over his transfer to the Gunners his impact was quite minimal. No fault of the player himself but by the time he was finally ready; our premiership campaign was effective dead and buried.

One person whose future is still uncertain is that of Bacary Sagna, he hasn’t signed a new contract and the chances of him staying are pretty slim now. In the stands we sung his name during the game, letting him know we want him to stay however we have been in this position many a time over the years . To lose the Frenchman would be a big loss however no player is irreplaceable (ahem. Thierry Henry?) in most cases. Those right-back shoes would be big ones to fill but if it happens we just have to get on with it. My only hope is if Bacary does move on it isn’t to a premiership rival, it just doesn’t sit right with me. The Robin van Persie transfer to man united never should have happened and although the club had a say in that transfer it is more or less powerless with Sagna. We can only ask him to think about the fans that have supported him all these years before signing on the dotted line for another premiership club. 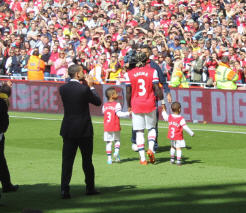 Looking back now on what could have been this season, a top four finish and (hopefully) FA Cup trophy is far from disaster. The important thing is to learn from the mistakes this season and put them right next. 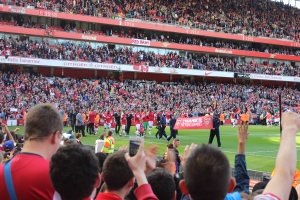 The Norwich game is meaningless to me now; all I would like from it is some youngsters to play and stake a claim for next season. Victory on May 17th is vital to finish the season right.