A good weekend for the Arsenal, after the dispatching of Burnley… Eventually the Gunners found their selves sitting in the top four after all games played. All be it quite a few teams seem to be sticking in a quicksand like position where dropped points can lead to a substantial drop in the table. Apart from the cushy placing held by the likes of Chelski and Southampton the rest are cobbled together and share in being consistently inconsistent.

The events of Saturday have most likely been reviewed to death and so I will alternatively take this chance to reflect on some of key points noted from the game.

Alexis is a gift from the Gods.
It would be hard to find anyone out there Arsenal fan or not that would not applaud the performances of Alexis Sanchez right now. The Chilean is literally carrying the Arsenal team at present and drawing comparisons with the impact provided by Luis Suarez to the Liverpool team last season. He has very much been a topic of discussion the past weekend given Arsene’s kind words in his pre-match press conference. You do have to wonder what kind of predicament the Gunners would be in considering the current underwhelming start to the season if Alexis had not been acquired in the summer. If the fighting spirit exhibited by Sanchez could be mirrored by just one or two more of the current squad then the team would benefit and provide more of a challenge to Chelsea. 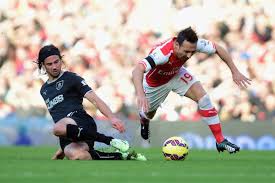 Santi is Jinxed.
Anyone who has watched the last few Gunner’s games will have noticed how unlucky Carzola has been. The Spaniard has struggled to finish off a number of chances in the past few games and that continued into Saturday’s match. These are not difficult chances I am talking about here but straight forward chances that players of the quality of Santi could score with their eyes closed. It’s just not happening for him right now and I hope Carzorla takes out the time this week to say a few Hail Marys and checks his boots for signs of chicken dust to break whatever hex is over him. With Aaron Ramsey getting closer and closer to full fitness the Spaniard’s place could be under threat if the misfortune continues.

Walcott returns.
It was great to see Theo Walcott return to Premiership action. The Gunners did miss the pace he provided last season. That problem was addressed this season with the acquisition of some pacy players to the squad but Walcott still provides a unique set of skills that can be utilised once he gets into full swing. If anything patience is required as Theo eases back into the first team picture. He won’t be the answer to all our problems but if managed right he will play a significant part in any success this season.

It’s always nice to get a clean sheet especially considering the makeshift back four the Gunners are forced to field at present. Yes, I know it’s only Burnley but 100% concentration is required at all times no matter who you play. A consolation conceded can lead in a slippery slope of cheap goals creeping in on a regular basis. It is important that the players who occupied the back four get into the habit of shutting teams out whilst building on their understanding week by week. Bigger tests are due in the next seven days against Anderlecht and away to Swansea so the clean sheet on Saturday was vitally important.

That’s all from me, enjoy your day people
Please feel free to like the Facebook page for regular updates of the blog.