The Arsenal rumour mill was in full effect last night with a new name added to the list of potential buys. Fernando Llorente according to sources from Spain claim that the Spanish international striker plans to hold a press conference on Tuesday to make an announcement. That announcement is heavily tipped to be that an agreement has been made between Athletic Bilbao and Arsenal for his signature.

Now if there is even a 1% chance that this rumour is true Llorente would not come cheap. His value would be upwards of £20million and that would throw up the idea that a signing of such a player would signal the fears that skipper Robin Van Persie could be on his way out.

The whole rumour could be the brain wave of the Spanish striker’s agent to create a ripple for potential contract negotiations with the club. I personally won’t get excited about this news until some more concrete proof becomes available. True or not true the alleged press conference on Tuesday should hopefully answer all the questions gunners fans may have. This is not the way Arsenal normally conduct transfers so do not have much hope.

In the midst of the Llorente rumours gunners fans had to chance to catch a glimpse of another striker recently linked to the Arsenal for the first time.France’s international friendly at home to Iceland had added interest given the fact it would be a chance to see Olivier Giroud in action. Although Giroud was not part of the starting line up he did not fail to impress when introduced to the field.

No goals for the striker but for a France team that was two goals down at half time Giroud certainly left a lasting impression on the game and on Arsenal fans thoughts of what could be. A neat one-two leading to an assist for Frank Ribery for the equalizer; then a cushioned header to set up Adil Rami for the winner in the last few minutes. Two assists, not a bad days work if you ask me.

In news closer to home Johan Djourou has been given advice from Switzerland manager Omar Hitzfeld that his international future was in threat due to his lack of game time at Arsenal. He was left out of the starting line up for Switzerland’s shock 5-3 victory over Germany as the Switzerland manager hinted that a move away from Arsenal may be his best option.

This is an awkward one for Johan to consider after the 2010/11 season where he established himself as a valuable member of the defence during Thomas Vermaelen’s extended lay off. The following season Djourou’s development if we’re all being honest actually stalled and quite possibly went backwards.

Starting from England’s Euro 2012 qualifier against Switzerland last summer where Djourou’s performance was nothing short of embarrassing and so began the downward spiral of confidence from the Arsenal faithful in the abilities of the Swiss stopper. Onwards from that game Djourou’s performances in an Arsenal shirt have failed to reach the heights of the season before. 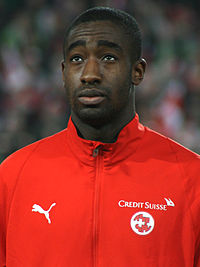 The previous seasons performances led to and improved contract extension (3 years I think) early last season. And it is here where the dilemma lies, the contract extension shows Arsene Wenger has faith in his abilities but the lack of game time also shows he has greater faith in other defenders at the club.

The ambition question comes up again; we questioned Jan Vertonghen’s ambition through his choice between Arsenal and Spurs. The same applies here; will Johan decide to move elsewhere to gain guaranteed 1st team football at a lesser club or stay and fight for a place at Arsenal and recapture the form from 2010/11 season? I believe he will stay and fight, the comments from Hitzfeld will not register too deep. International managers make these threats all the time, some players react most knuckle down and earn their way back into their managers plans. Besides, Arsenal doesn’t do non lucrative contracts. Expect Djourou in Arsenal colours next season.