The day is finally here for England to show what they can do in Euro 2012. We have now reached the final day of the first set of group games. England will take on France while Sweden will take on the Ukraine.

I’m a little excited now at the prospect of Oxlade-Chamberlain showing what he can do on the big stage, previous I admitted I was worried about the great expectation that would be thrown upon him after the loss of vital senior players from the squad.  However that expectation was quashed slightly after the game against Belgium. I believe the press and fans realised he isn’t going to rule the international stage overnight.  However he has every chance to make an imprint in these championships if used right by Roy Hodgson.

The football so far at Euro 2012 has been very enjoyable, some tense affairs but also some great open games and goals too. England really have nothing to lose facing the French, they are not expected to get a win against France. Their preparation has been hindered by injuries to key members, uncertainty over who the manager will be and then the squad selection by the new manager. England fans are maybe less optimistic but maybe that can work in their favour. If England can get a result from the France game and progress from the group they have every chance. Similar to the Tennis when Andy Murray (or previously Tim Henman) makes it to the quarter finals of a grand slam the fans then start to believe it could happen, the player starts to believe he can do it and that belief can carry you on. Ok, it hasn’t quite worked out for those tennis players but my point is the psychological boost you can get from knowing the fans are behind you and believe in you really can help.

Theo Walcott will be hoping to make an impact in the championships; this in effect will be his first real tournament to make his mark. He was too young for the World cup in 2006 and then wasn’t selected for the World cup in 2010. He has a point to prove and I hope he makes it. In a squad shorn of true star quality this could be the time for Theo to show he can make a difference and have the fans believing in him again like after his hat-trick against the Croats a few years ago. 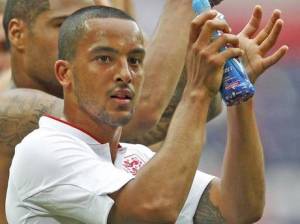 He is more likely to get on the field before Oxlade-Chamberlain and he needs to ensure he is first choice for the right flank. We have seen last season he can provide goals for team mates. I know Andy Carroll and Danny Wellbeck are not of the calibre of Robin van persie but if Theo keeps plugging away the chances will eventually go in. On top of that Theo should utilize his pace to get in the goal scoring positions too. On his day he is a cool finisher the only problem is his shots can be hot and cold, for every neat finish there’s a pea-roller from 30 yards a baby could stop with little effort.  Hopefully he will have worked on that in training.

I’m still very excited for our Arsenal boys that they can do something positive at the Euros and that starts from the first game.

There was some news that broke last night that Arsenal have agreed a fee with Montpellier for the signing of Olivier Giroud . Sources came from Al Jazeera tv that the deal has been struck. An exciting bit of news if true but I would like some more concrete sources before I can get happy. If true then yes it is merely a price has been agreed but not anything agreed with the player as yet. With France preparing to face England I’m pretty sure nothing is likely to be agreed for now with Giroud, a good game against England and several more teams could also join the race to sign the player. I suggest us gooners need to wait this one out.