Well the new season kicked off yesterday, we welcomed Sunderland to the emirates in the baking weather as we hoped to get a good start in the post Van persie and Song era. I had my reservations before the match that it wouldn’t be a stroll in the park against Sunderland; they are no mugs and on their day can frustrate the biggest of teams. Sessegnon is always a danger and caused us problems in the games last season. I still expected a win but a hard fought win, that wasn’t the case as we were frustrated into a 0-0 draw.

With the news of Alex Song’s potential move to Barcelona coming into fruition it was no surprise to see he was not on the pitch warming up with the rest of the squad before kick off. He was probably en route to Spain at that very time and the writing was pretty much on the wall that the Arsenal midfield will never see those blond highlights ever again.

The starting line up did include 2 of the new signings in Lukasz Podolski and Santi Cazorla, Frenchman Olivier Giroud started on the bench. With injuries to Koscielny and Oxlade-Chamberlain Arsene Wenger played his strongest team possible with Per Mertesacker drafted in and Abou Diaby starting in the midfield.

Overall it was a tense game with Sunderland causing some problems with their pace early on. Thomas Vermaelen’s Arsenal took their time to find their rhythm; I guess we had new personnel that still need time to gel into the Arsenal way. Whether time for them to bed in can be afforded is another matter, given the negative press awaiting any games we don’t win the team and new players really needed to hit the ground running. We will constantly be reminded of Robin Van Persie and his goals so the sooner we can make the press see life goes on without him the better.

Podolski didn’t have a bad game however it seemed he wasn’t allowed much space by the Sunderland defence and despite the German showing his strength and close control in tight situations he was never really given any clear opportunities to gobble up. Santi Cazorla really showed how good he was in the game, he appeared to pull all the strings from midfield and showed his shooting prowess with a few chances especially one amazing dribble and shot from 25 yards that was clawed from the top corner by Mignolet. He really does look the part and is the kind of player the midfield could be built around, he has a big part to play this season and will help players like the Ox and Ramsey improve their games.

Competition for places is looking good however we need to gel quickly. Olivier Giroud when he came on in the second half to replace Podolski looked a massive imposing figure and I’m sure once he gets a run will be scoring for fun. Unfortunately the only lasting memory people will have of the striker so far is his miss late in the second half. He was slipped in by Cazorla and without realising he had time on his side he dinked the ball past the keeper and just past the post. In his defence the opportunity came to him on his weaker right foot but I’m sure the player knows deep down he should have at least hit the target. Arsene was in agreement in his press conference after the game when he said

“Giroud had a great chance on his right foot. I think he had more time than he thought and we expected him to score that one, of course.”

I’m sure he will be fine but the sooner he gets his first goal the better. In the grand scheme of things a 0-0 draw isn’t a disaster, it would have been nice to start with a win but given all the negative press over the past week with the loss of players it was sure to be playing on the teams mind. We will get past this after all we have become experts in rebuilding after the loss of stars.

A quick word on Alex Song, it was made official yesterday that terms have been agreed between Arsenal and Barcelona. The player leaves us and although I initially didn’t want him to leave I wish him well at his new club. He will find it tough to break into the team there and personally I can see his time at the club following a similar path to that of Alexander Hleb. As big as a player Song became in the Arsenal team he was not quite the complete player, he did master a niche for himself playing around much more talented attacking players. Some of those attacking talents he played with clearly rubbed off on him as exhibited by his number of assists last season. 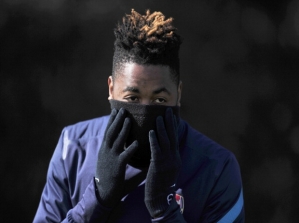 Arsenal fans have a reputation for being a bit impatient whenever a flowing move breaks down due to a stray pass; song was no stranger to the odd stray pass. The Barcelona fans expectation of perfection trumps the arsenal fans ten fold so Song will have to step up his game to another level to make his move a success. I could be wrong and he could carve out a successful spell at the club however if Barcelona are asking him to just act as a shield to the defence then they may need to have a word. Unlike Van Persie moving to a rival I don’t begrudge Song the opportunity to become a Barcelona player. It is a great honor to represent such a big club and the chance to play alongside superstars like Messi, Xavi, Iniesta amongst others would be a hard choice for any player to turn down. Song has moved abroad which I have no problem with, I actually think he is a replaceable player and so do not find his departure as hard hitting of that say Van Persie or Fabregas before him. I will miss his presence due to the amount of time he has been part of the club but his departure is an easier one to recover from with the right signings.