Big big day today, arsenal fans across the country (and world) expect some transfer action today. Arsene Wenger has hinted, he has teased the press that transfers will be made, he has kept his cards so close to his chest that we have no indication of who may be coming through the emirates door before the window closes. In the past few days Wenger has stated that any players coming in will be top top class players, no average players but top top class players. I hope he sticks to his word as nothing will be more frustrating than seeing us sign a couple of players who are the best players around for their age and have potential to be the best. We really need players ready to be leading lights in the first team now not youth who will jump ship as soon as they reach the required level.

All I know is I along with many other fans of all clubs will be glued to some sort of media awaiting news of players coming in whether it’s watching sky sports news, refreshing various football websites or listening to radio updates. We all get hooked in by the fever of the deadline day deals; I wonder who will be spotted in their private helicopter hovering over the football ground of the team they are going to sign for this time?

I really don’t think any genuine names have been thrown into the hat for potential arsenal signings, many have been mentioned without any solid proof to back it up. I personally have a feeling Clint Dempsey could be a potential signing, my reasoning for this is the silence, nothing has been mentioned from the American’s camp. This kind of silence could be because of the typical arsenal style of keeping everything hush-hush. Sorry guys that’s as far as my theory goes and it’s a pretty weak one. But never fear as I can guarantee you anything that does happen will be done TODAY.

With the incoming players not being so transparent we at least have some light shed on an outgoing player. It looks like Nicklas Bendtner has finally found a club that meets his 3 important criteria with news that Juventus are the most likely destination for the striker. After Dimitar Berbatov pulled a sly one on the club they turned their attentions to the big Dane to lead their line and he is known to have had a medical for the Italians and will probably have his move announced today. Good luck to him, he managed to get a move to a decent club (despite being Juventus pan B) after his agent’s phone refused to ring all summer.

Apart from the awesome excitement whipped up from today’s deadline day activity Arsenal were involved in some draws for a couple of tournament’s yesterday. In the domestic corner the draw was made for the third round of the capital one cup when we received a home tie against Coventry. A great draw and another brilliant chance for fans to obtain tickets at a discounted price to see some of the stars of the future grace the emirates pitch in first team duty. That game will happen in late September and I hope we can go on a good run in that competition with a nice balance of youth and experience.

In the slightly larger more important draw that happened yesterday the groups were decided for the champions’ league. Read into it as you may I think we received a reasonable draw considering some of the teams we possibly could have drawn. In our group we were paired with Schalke, Olympiacos and Olivier Giroud’s old club Montpellier. We will have to be on top of our game and the early season cobwebs totally blown away to ensure safe passage from the group. 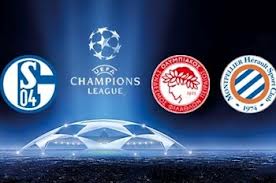 There is slight relief that our group did not resemble that of Manchester City, truly a group of death. We’ve been in this competition long enough to not take any opponents lightly, no games are easy enough that we simply need to turn up. A good result in our first group game which is away to Montpellier would be a nice start.

Overnight The Mail and The Express have run with stories which link us with snapping up Chelsea’s Michael Essien on loan for the season. Now we are just being teased, I for one am not a fan of the football equivalent of ‘blue balls’. The awesomeness of such a signing would be off the scale, Essien would be the type of ready for now player that would fit the quality of player we need. How true the story is I don’t know, the logic behind Chelsea letting a player like Essien move to a rival is enough to confuse Spock. Understandably the Ghanaian hasn’t hit the heights recently of his days when Mourihno was still in charge but he would clearly be a quality addition to any team. The loan transfer of Yossi Benayoun last year was a different proposition; he clearly wasn’t part of AVB’s plans and needed Arsenal as much as Arsenal desperately needed him at this time last year. Don’t get too excited on this news yet Arsenal fans but take comfort in the fact that all will be resolved before we reach September 1st.

Enjoy deadline day today people, it will come with many twists and turns. hopefully that hot presenter on sky sports news will work double shift today.

Please feel free to like the Gambeano Snitch Facebook page, share your thoughts and any rumours you hear. I think I hear Neymar’s helicopter flying above my head right now…