Henry, who happens to be the all-time leading scorer for Arsenal, returned to his old club on loan last January during the Major League Soccer break. According to Arsene Wenger, Henry has trained with Arsenal three times now. When asked whether Wenger would sign Henry on loan again, he responded that he did not know yet, although he had not ruled it out. Wenger did add that the 35-year old striker was still looking sharp.

Henry scored twice in his seven appearances during last season’s loan. He scored the lone goal in the 1-0 win over Leeds United in the FA Cup as well as scoring a classic extra time winner against Sunderland in the Premier League. Wenger signed Henry on loan last January due to winger Gervinho’s call up to international duty at the African Cup of Nations. Arsenal will be losing Gervinho once more, as they have decided to hold the African Cup of Nations two years in a row. Should Marouane Chamakh leave, Arsenal will find themselves short of strikers up top. 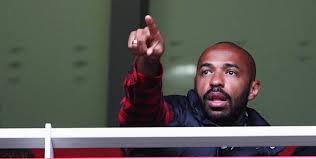 Henry has scored a total of 228 goals during his time at Arsenal and was recently honoured during Arsenal’s 125th anniversary celebration with a statue outside of the Emirates Stadium. The only other Arsenal player to have a statue erected in his honour was former captain, Tony Adams. During his time at Arsenal, Henry led the team to two Premier League titles and three FA Cups.

Wenger had nothing but good things to say about his former player, saying Henry’s return to the team would not only bring incredible skill to the field but invaluable experience to the squad. Wenger praised Henry’s communication and leadership qualities, claiming that he is a very intelligent person who would provide valuable advice to the team’s younger players.

Although Arsenal were recently in a slump, they seem to have rebounded with an emphatic 5-2 win over London rival, Tottenham, as well as securing Championship qualification with a 2-0 win over Montpellier. Although striker Olivier Giroud was not able to score against his former team, he did provide two assists and has finally come into form, having scored five goals in his last six games.

Wenger attributes Giroud’s late start due to the difficulty that new players have adjusting to the Premier League and the fact that he had to develop an understanding and comfort with his teammates. It took Giroud seven games to finally see the back of the net, and it is finally looking like he is regaining the confidence that saw him lead the French League in scoring last year with 21 goals. Per Mertesacker had similar problems adjusting last year, and has now become Arsenal’s most dependable defender. Mertesacker agreed that it took some time for him to settle at his new team, but he is now much more comfortable with the style with which Arsenal play.

After a string of poor performances, the last two wins should instil some confidence into the club going forward. They are currently sitting in sixth place with 19 points, nine points behind league leaders, Manchester City. Their next game is on November 24th against Aston Villa. If you want to see the outcome, be sure to purchase your Arsenal tickets today. Support your favourite team on the field.

Today’s guest post was brought to you by Matt Milstead.