Interesting week ahead for the gunners; a week which has the potential to be the turning point in the fortunes of Arsenal football club. If history manages to repeat itself the game against Bayern could help restore belief amongst the players and fans much like what happened last year in the games against AC Milan. After a horrid 1st leg result against the Italians the team managed to pull off a gallant effort despite still being eliminated. The players were able to walk off the field with their heads held high, pride restored and a renewed belief and support from the fans as they saw out the season into third place.

The game with Bayern requires a massive performance from the players; they owe it to the fans, the manager and themselves to prove they do belong in the champion’s league amongst Europe’s best. The first leg played into Bayern’s hands as morale was low amongst the players and the Germans exploited that. We were totally outclassed and in my opinion at that moment in time it was not a true reflection of Arsenal football club. Now is the opportunity for the club to show they are miles better than that first leg performance.

A gift was presented in the form of Liverpool’s win over Spurs yesterday; the gap can be closed on our North London rivals in the league but a heavy/embarrassing defeat at the hands of the Germans is likely to filter through into the league form. A run of games is required now through to the end of the season, the club cannot afford to be hit and miss any more. 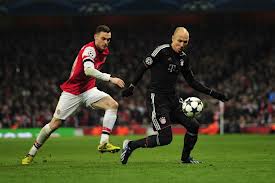 Elimination at the hands of Bayern may not be avoided but it does not mean Arsene’s team cannot pull off a victory on the night and/or produce a reassuring performance to restore pride. A performance of note is likely to be noticed by the Spurs players and the closer the season moves towards squeaky bum time the psychological effect that could have on their players is massive.

The Spurs performance against Liverpool was not bad, it was clear their confidence was up given their recent results and at the point they went 2-1 up the game looked to be theirs to lose. Thankfully for Arsenal fans they tried their best to throw the game away as they gifted two goals to Liverpool. Brain-dead defending which I thought was only a disease Arsenal suffered from this season ensured Liverpool left the game with all the points.

It is the little things that can turn a clubs season upside down, at 2-1 up they looked certain to add another goal and put the game beyond the Scousers however that moment of madness from Walker changed everything and from being at a level high in confidence and cruising the Spurs players now find themselves looking over their shoulder and worrying. Doubt can creep into future performances and if Arsenal takes advantage of the slip up it will make for a very tense run in.

Chelsea I still believe is the stronger of the two teams above Arsenal and likely to fix their problems while Spurs are the more fragile mentally and the team most likely to be caught. My only hope is the Arsenal mentality will grow stronger based on their Champions League efforts this week.

2 thoughts on “Can recent history repeat itself against Bayern for Arsenal?”