So that’s it, fourth place secured with a win at Newcastle. No playoff though I doubt Arsenal fans were too bothered about that, Spurs won but that effort was in vain as Arsenal took hold of their own destiny and achieved the win required.

Any Arsenal fan that tells you they were not nervous before or during the match are cold faced liars, the tension was unbearable at times and the final whistle could not come quick enough towards the end. 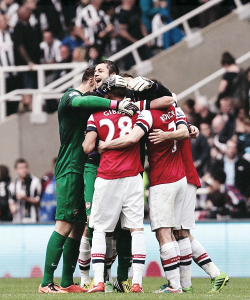 Laurent Koscielny provided the deciding goal to maintain champion’s league football for the Gunners and was a rock at the back to boot. Man of the match in my eyes and it is hoped his form from the second half of the season is here to stay permanently.

The whole team deserves praise for holding their nerve to carve out the result when the pressure was surely on, Tottenham had the far easier game to play and it was important that Arsenal scored the first goal to alleviate any extra nerves which could disrupt their performance.

The importance of securing fourth place cannot be stressed hard enough, competing in the champions league is the difference between attracting players of the calibre of Jovetic or settling for players of lesser ability. European football is a bargaining chip in negotiations and will ensure top players will consider signing up at the Emirates, it also ensures the current squad won’t get itchy feet for football elsewhere. 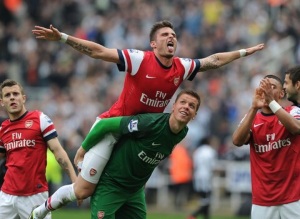 Many have commented on Arsenal’s celebrations at the final whistle, saying that they celebrated as if they had won a trophy; I can assure you if fortunes were reversed and Tottenham achieved the fourth place they would have celebrated the same way if not harder. Fourth place was at stake but also was the chance to better your bitter rivals, nothing can be sweeter than achieving at the expense of your rivals. A trophy was not won but the tears of the spurs players at the final whistle is worthy of celebrating 20 times over. 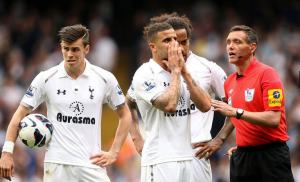 Arsenal can now build on this, it will take shrewd business from Arsene Wenger to improve the team and create a squad capable of challenging for honours in an Alex Ferguson-less Premier league. The core of the team is there, there shouldn’t be a Robin Van Persie-esque departure from the squad this summer. The additions from last summer should improve on their solid debut seasons and a clear out of the less involved players should come to fruition.

Andre Arshavin took to twitter to bid farewell to Arsenal, he thanked the fans, his colleagues and all the staff at the club as well as wishing the club well in next year’s champion’s league. It’s a nice touch from the diminutive Russian who never said a bad word about the club during his exiled period this season. He left the club with many quality memories most notably the 4 goals at Anfield and that winner against Barcelona. He will be fondly remembered by Arsenal fans and I for one wish him well in the next chapter of his career.

Guys, please take advantage of the bragging rights to all the Tottenham fans you know. Do not feel sorry for them because they would not hold back if roles were reversed. Make them feel like rubbish today and for the rest of the week if you can.