Well that came out of the blue, here we were wondering if Alex Oxlade-Chamberlain would get the chance for a cameo role against the French. What we didn’t expect was for Roy Hodgson to give the young gunner a start in the game. This wasn’t a friendly, this was a start against one of the tournament favourites France and I have to admit the boy didn’t let his country down.

I spent the best part of yesterday’s blog expressing how I hoped Oxlade-chamberlain would play some part in the tournament but never imagined he would have been in Hodgson’s plans. Downing seemed a shoe-in for the left side of midfield due to his age and experience against a high-profile team like France. It wasn’t to be, rumours filtered through in the late morning that Roy would be starting the youngster but they were just rumours, nothing concrete to confirm.

The buzz from the rumours alone were enough to get Arsenal fans excited, this was a game we weren’t going to miss but the added bonus of young Alex playing ensured it would not be missed for anything. Once it was confirmed it was a proud moment for all linked to Arsenal to see that Roy Hodgson had big faith in his ability. 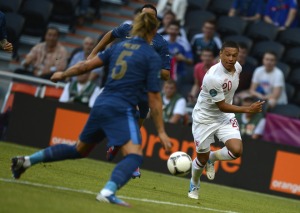 And to the game the young gunner did not disappoint, putting in a disciplined and controlled performance that made a mockery of his young age. We all know Oxlade-chamberlain for his dazzling runs, awesome skill and play with no fear attitude but this wasn’t a game for running gung-ho at the French team. Roy Hodgson set out a game plan to be followed and Oxlade-chamberlain ensured he did his part in a disciplined performance by England.

France in hindsight were the better team, they had more chances at goal and more possession.England were camped in their own half in the second half of the game and did enough to contain the pressure. Roy Hodgson selected the team that he felt would cope best against the French flair, disciplined enough to track back and close the French down but still pose a threat on the counter. The 1-1 draw was a great result for England and Oxlade-Chamberlain can hold his head up high for playing his part in professional team performance.

He was replaced in the 76th minute as Roy decided to change some tired legs; he played his part and now can look forward to the remaining group games having overcome the hardest test in the group. Expect him to have a more offensive role against the Ukrainians and Swedes if he plays.

The Olivier Giroud story is starting to pick up more pace as news surfaced that the Montpellier manager Rene Girard has apparently confirmed on French radio station RMC of Arsenal’s interest in the striker. Again it could be more made up stories since it’s the easiest story to run with without hard evidence in writing. If the manager has in fact confirmed the negotiations with Arsenal let’s hope his club Montpellier can confirm this more officially soon.

Special mention goes out to Sylvan Wiltord who announced his retirement from football yesterday. Our former French striker was one of the invincibles and spent a good few years at Arsenal. One of his most memorable moments was scoring the only goal at Old Trafford to clinch the title for us in 2002. Even more memorable was his part in one of the more remembered goal celebrations in Arsenal history when he allowed Kanu to pole vault over his head when in standing position. He will always be remembered for playing his part in that title clincher AND for looking like a member of Fine young cannibals. All in all we salute a former gunner who takes place in a part of Arsenal history.