As the new week kicks in we move closer towards the month of August and towards the 18th of that month which marks the new premier league season kick off. In turn on Thursday this week will be the 1st opportunity for fans to purchase tickets for the opener against Sunderland. The tickets on sale on 2nd August are only to the silver members whilst the following week on the 6th red members will get their chance to purchase tickets.

Season ticket holders of course need not to worry about sale dates as their allocation are guaranteed but for silver members like myself it’s a first chance to get our hands on the discounted cheaper category C seats as revealed by the Arsenal ticketing folk earlier in the month.

I’ll be sure to log in early to ensure a decent seat in a block I prefer and I advise all others to do the same, the opening fixture tickets will not hang around waiting for you.

It was revealed yesterday in the Daily Star that Theo Walcott has given his biggest hint yet that he intends to stay with Arsenal.

He was quoted as saying when asked about contract negotiations:

“The club and my agent are talking but it is a slow process and my last contract took six months to agree – but it will come.

We’ll see what happens but I am not too bothered about it. I am keen to work with the team just trying to get fit and there is still got a long way to go yet.”

A rather laid back response but still a positive indication that he forsee’s an outcome where he will still be an Arsenal player. I know many have grumbled at his alleged wage demands that have been thrown out there but I guess the overall wage should not be our concern, only the fact that he eventually puts pen to paper. The situation we find ourselves in with current captain robin van persie should not be a situation we find ourselves in again with other players. It is frustrating as a fan to see players walking out the back door for free or for a heavily discounted price due to time left on contracts. Nasri did it last year, Robin this time. I remember when Matthieu Flamini walked out on us at a time he really established himself in the team, the departure left a bitter taste in the mouth. 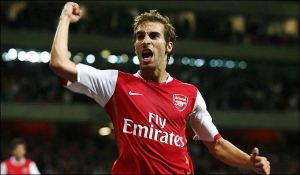 Though when you look at it we got a taste of our own medicine as we acquired him from Marseilles under the same circumstances (running down his contract) and the season prior to his departure he was seen by arsenal fans in the same light we look at Denilson. He turned it around though and was able to engineer a move to a big club like AC Milan, I suppose he at least showed some loyalty by not moving to another Premiership team. He may still get booed whenever he returns to emirates but I don’t hold no animosity towards him I just hoped that was the last time we let one get away due to lack of urgency in negotiations. Lets hope we can buck that trend after Van persie is gone, nobody likes giving away things for free especially when they are valuable assets.

I didn’t catch any of the game yesterday against Kitchee but heard the same old reasons mentioned for the loss of our goals, defensive lapses, missed chances, improved second half. I find it hard to assess Arsenal on the pre season friendly games especially when we don’t have the whole group together. I’m sure Wenger, Bould et al have been able to see where improvements are needed from the fringe players, they will work on them when they return. We must not forget the games are just as important for Arsenal on a marketing level as they are on fitness side. The real hard work starts when the whole group is together, the younger players who impressed Wenger on the Asia tour will be integrated with the first team and given another chance to show their stuff in the final few warm up games. 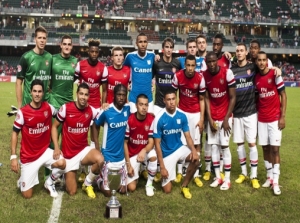 Register, create your team then click join a league

Depending on numbers there may be a prize available for the overall winner. Prize TBC

It’s free to join, you have nothing to lose!!