Oh man, it’s finally over. The Olympics have come, blown us away and now trickled away into history and taken a firm place in our memories. I have to admit in tandem with Euro 2012 the Olympics perfectly filled the inter-lull usually felt in close season. Shamefully the London games filled up so much of my time I never managed to release any posts during the two weeks. A mixture of watching the games and being glued to the computer trying to buy damn tickets to the event meant my attention to the Arsenal took 2nd place. This must be the first time ever in my life I’ve put Arsenal second best but to be fair it all starts for Arsenal on the 18th when Sunderland come to town. I’m fully focused and promise no more distractions.

Now where do I start on the Arsenal news, Robin Van Persie still hasn’t left though after his reception at the Cologne game that potential move could move a little faster now. Personally I wouldn’t boo Van Persie but that’s me, you can’t expect every Arsenal fan to agree with you. I still think there’s a small possibility that he could change his mind and sign a new contract and with that in mind the fans could have maybe greeted Van Persie’s introduction to the game with silence rather than boos. That could be the straw that breaks the camels back though on the counter argument he has publically stated he will not sign a new contract. Lack of commitment to any club would be met with disdain and our ‘current’ captain will need to work hard to win back the respect from the Arsenal faithful IF he decides to stay. We’ve seen it work with Wayne Rooney at Man Utd and so it is proved possible for a player to change their mind. I am in the camp where if he refuses to sign a new contract and would rather go on a free next season then we should sell him now. If he signs a new contract then all is forgotten and we move on.

One thing that has quelled most of the fans fears over Van Persie is the positive performances from the new boys against Cologne. Podolski bagged two goals showing a taster of what we are in store for this season and Olivier Giroud looked very dangerous and was always in the mix for the majority of the time he was on the pitch. He didn’t score as he seemed to have a personal battle going on with the Cologne keeper, he was always on the end of chances, he showed an aerial threat and there’s no doubt the goals will come for the Frenchman.

Apart from the forwards new boy Santi Cazorla looked very tasty in midfield and I have to admit the squad is looking good right now. Playing Cologne is a much different proposition from premiership football but there were still signs of the connection; a telepathy between the established and new players that will undoubtedly reap benefits once the season gets going. Jack Wilshere is still the man and hopefully he will overcome the injuries and resume his excellent career but Wenger did a great thing here signing Cazorla. We couldn’t afford to wait for Wilshere and heap great pressure on him to hit the ground running. Cazorla has instantly taken the burden off and now Jack can concentrate on getting fit whilst Santi can come in and fill the void left by the loss of Jack and Cesc.

Some good news on the Alex Song front as the Cameroon man insisted he is happy at Arsenal. He revealed there is truth to the rumours that Barcelona came a knocking but assured fans that he has no reason to move from a happy place but also revealed his pride at being linked with the club. Song was quoted saying yesterday:

“I am not going to lie if I said there is no interest but I am at Arsenal and I am happy at Arsenal.”

Any player would be proud to be linked with that club; with my rose-tinted glasses off Barcelona are a class team and the envy of all… even lucky Chelski. But now that the man has spoken please can you go away Barcelona. 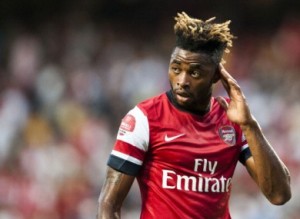 It’s funny how much you appreciate a player when there’s a chance he can go. We have all grown to appreciate the man over the years; he initially divided fans views on him but has blossomed under Wenger to a valuable first team player. We know his focus could me more tuned to the defensive side of his game rather than his through balls but one thing we can’t deny is since his rise to prominence in midfield we have shaken off the tag of having a soft centre. For a few seasons we were classed as being all tippy tappy with no steel to stand up to the men; now I have seen Alex Song really show his strength in the middle of the park and lead by example. He is not the finished article by any means, plenty still to work on but at 24 now he really has come on leaps and bounds and there’s nothing stopping him from continuing the development. I’m glad he’s staying and im sure he won’t regret his commitment.

Young Ryo Miyaichi has gone to Wigan on a season long loan, this is a great move for the youngster, he gets another opportunity to shine in the premiership and Wigan provides the platform. Wigan surprised a lot of people with their football in the final part of the season; they pulled off some massive wins against big clubs including our joke result at the Emirates. Victor Moses could be on his way and that will only open the door for Ryo to fill the main man role at the club. It’s a good fit for him and I’m sure he won’t let the Latics or Wenger down.

Niklas Bendtner has sort of broken his silence to reiterate he has no intention of staying at arsenal and expects to leave before the transfer window closes. The striker revealed to Danish press:

To be honest I don’t really care what he does. He doesn’t want to play for us, he had the potential to be a true arsenal star but his ego often got the better of him. He wants to leave so he is already in the past. He’s not worth any more wasted words I just hope his advisors will be honest with him and tell him Barcelona and Real Madrid are not knocking on the door.

Register, create your team then click join a league

Depending on numbers there may be a prize available for the overall winner. Prize TBC

It’s free to join, you have nothing to lose!!