Well that was not part of the plan. Operation get revenge on Norwich fell flat on its face. Yesterday I mentioned how we had unfinished business with the canaries and a win was minimum expected from the game. As in true Arsenal fashion the games we expect to win are the ones we save our worst performances for.

Due to traffic problems I was unable to catch any of the first half of the game, maybe that was a blessing in disguise because if the second half is anything g to go by I witnessed a flat, toothless  forgettable performance by our boys.

All the pre match talk was about the inclusion of Jack Wilshere in the first team squad for yesterday’s game. At the time it was exciting to think we will have Jack back but also worrying that a return too early was not needed. Based on our current form we were performing well in midfield and had a number of options to select, we were not desperate for his return. By the end of yesterday’s game our abundant stock of midfielders had shrivelled to emergency levels and the sight of Jack on the field would have been a welcome sight.

With the loss of Theo Walcott from the international break Alex Oxlade –Chamberlain has now decided to keep Theo company in the treatment room after limping off from the game with a knock just 8 minutes after coming onto the field. The once frozen out Arshavin will now find himself vital to the team. It’s amazing how quickly fortunes can change, our injury list is growing at a faster rate than expected and now we find ourselves in a situation where the next team will be picked by default because there are no other options. 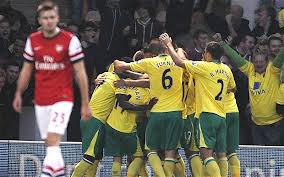 I really struggle to find any positives from yesterday’s game, we really were that bad. Norwich really should have scored a couple more goals. The fact that we finished the game at only one nil is flattering to us. Gervinho who was so impressive when Wenger took the chance and played the Ivorian in a central striking role seems to have forgotten what to do when played on the flanks. With Olivier Giroud given the striking role Gervinho’s influence has diminished out wide. Wenger needs to address how to can reignite Gervinho or move him back to the middle.  Giroud didn’t do enough in my opinion but looking at our bench yesterday there was no alternative option for the striker, maybe the sight of Chamakh on the bench (instead of Jack if there was no intention to use him) would have instilled more urgency in the Frenchman’s game. Santi was quiet as the Norwich team focused on nullifying his threat. That won’t be the first and last time he will receive extra attention, but we need more than one man to be on his game to win. The whole team played poorly and have a lot to prove in our next game against Shalke.

After the game when asked about the reasons for the defeat Arsene Wenger said:

“I felt we lacked a bit of sharpness. We tried to get into the game after 20 minutes. But we missed what makes the success at the top level – that is complete focus”

I agree the focus was missing in attack and defence; the international break surely did not help our cause due to fatigue and the injuries to players. I suppose all the other teams in the league experience the same situation, some clubs more than others so maybe I can’t use that as an excuse.

Just like the rest of you I will have to shrug off this defeat and look forward to the next game. Call it a wakeup call, an immediate response is on the agenda and hopefully Shalke will feel the full brunt of a wounded ego.

Try to enjoy your day people.