At last the proper football is back, the international break is finally behind us for the season and now the chase for top four can continue uninterrupted. Reading came to town yesterday, in normal circumstances a home banker but so was Blackburn. So nothing was to be taken for granted, we have fallen to way smaller teams this season and it was important to keep up the recent momentum in order to maintain the pressure on Spurs and Chelsea.

Equally important was the opportunity to honour the twelfth anniversary of David Rocastle’s passing. His family was invited as special guests as the club paid homage to the man who is so close to many gooners’ hearts.

This was my first game back at Emirates since the embarrassment which was the Blackburn game in the F.A. Cup so I was quite eager for the team to put things right on a personal level and remove any possibility that my attendance was evolving into a fully fledged  jinx.

Here are some of my thoughts on the game yesterday:

Rocky will never be forgotten.

His name gets sung from the stands, many a fan buy shirts with his name on the back. David Rocastle is one of those players that the fans remember fondly. He was taken from the world way too soon and despite being not being on the clubs books at the time of his passing he was an Arsenal man through and through. The club doesn’t have to dedicate days to the man, no one is holding a gun to their head however it is a nice touch that the club recognizes his contribution to its history. He came through the ranks at the club, he represented England when with the club, he was part of one of our greatest nights in our history playing in that game at Anfield 1989 and was genuinely a talented player.

The club paid tribute to Rocky yesterday prior to kick off, a picture was also displayed on the big screen and the fans sang his name. A rare occurrence happened yesterday when the game was going on; the fans started sing the Rocastle song to the point where the whole stadium was in sync. What was a nice touch by the club was the decision to remove the game stats from the jumbotrons and re-display the picture of Rocastle. The singing went on for at least 5 minutes all while the game was still playing. It was a lovely gesture and I am sure everyone connected with David Rocastle will have appreciated the experience.

The curious case of Gervinho.

Only Gervinho could score one goal, set up a further two, leave the pitch to a standing ovation and still not convince the fans of his worth. He had a good game by his standards, he provided end product and along with Santi Cazorla was in contention for man of the match. Gervinho is a confidence player and the fact that he grabbed the opener did him a world of good, the only problem in his case is the trademark misses were still there. In the first half plenty of chances and opportunities were wasted, although we were winning the longer the game stayed at 1-0 the more the opposition could grow in confidence. 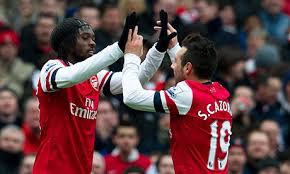 Gervinho was at the heart of most of the attacking moves in the half and it is a question of do you blame him for wasting opportunities or do you applaud him for being dangerous enough to be on the end of and create the chances? The fans in the stand were divided and I’m sure many a fan watching on TV were the same. Most importantly in our run for top four we need to get behind every player. Gervinho offers an alternative and on his day can be devastating; maybe with the crowd 100% behind him his devastating best can become more frequent.

After the two previous games resulted in clean sheets the Arsenal defence didn’t manage a third as they conceded a goal against Reading. The defence in general played well and the trademark shakiness when on top was not there yesterday. The goal conceded may have been avoided but this was a much focused performance from the back five overall. Arsene made a change to the defence by drafting in Bacary Sagna at the expense of Carl Jenkinson. It could be deemed unfair to drop Jenkinson as soon as Sagna returns but I suppose a home game vs. Reading would be deemed a good opportunity to test Sagna’s legs on his return.  Sagna’s experience will be vital in the run in and I’m sure Jenkinson will still get opportunities on the pitch before the season is over. Should Arsene have changed a defence that achieved the last 2 clean sheets? Normally you would say no but I guess he had to change it already due to the cup tied situation of Nacho Monreal, so the left back position has been shared and Arsene took the opportunity to do the same with the right back position. The important core has to be the centre-back partnership, there’s no need to tinker there unless forced and I’m happy the manager is keeping the two together as yesterday may have been  classed as an easy enough game to swap things around.