Project youth comes under the spotlight once again with the news that promising young defender Martin Angha has signed a pre-contract agreement to join German club FC Nuremburg in the summer. Arsenal football club has created a reputation for nurturing young talent and blooding them into the first team earlier than expected at most big clubs. When it has worked it has really worked and at other times many fans have been left scratching their heads wondering what the manager actually saw in a player.

Having the eye to see star quality in a young player is not a simple science at all; running rings around players in your age group does not automatically transpire into becoming a world star when thrust into the first team. Sometimes it can be linked to an earlier growth spurt or sheer athleticism that leads a player to stand out from the crowd but then there is the crossroads that is met where cutting it against men requires that special star quality that sets apart a youth star from the real deal.

Now given the growing barren spell of trophies at the Emirates over the years Arsene Wenger has been seen to gradually decrease his initial faith in bringing through youth and instead purchase more established players. He hasn’t completely done away with blooding youngsters and the Capital One Cup is still a platform for the potential to test themselves against more challenging opposition than what they are used to in the reserves and youth leagues. Though the past couple of seasons has seen Arsene Wenger produce more balanced teams thus ensuring enough experience is on the field to help along the youth. In the past it wasn’t a shock to see a Capital One Cup line up littered with young players; they would play with no fear and leave the fans in the stands glowing about how bright the future was.

Now more often than not players that were tipped as standout players in the youth set up have been moving on to pastures new, what isn’t entirely clear is whether these players have moved on because Arsene has identified they don’t have what all it takes to transfer their quality into top level football or whether their impatience has got the better of them. Many young players experience first team football out on loan and when they return to the club the prospect of playing in front of one man and his dog fails to inspire them. The first sniff of an opportunity to become a first team player elsewhere can be too hard to turn down; the manager doesn’t seem to stand in a player’s way when he cannot justify a place ahead of the current players he has in the first team.

Last summer promising Dutch/Turkish player Oguzhan Ozyakup made the move to Besiktas, it seemed a bit of a shock at the time as he was on the fringes of the first team and seemed destined to take his Arsenal career to the next level. Fran Merida comes to mind as another who maybe left before the manager expected. This season there are a number of players who could potentially move on this summer as the club delays on the offer of new contracts. It’s a gamble the club plays on those the manager is not 100% certain of, the time spent thinking allows players like Angha to make other arrangements.

Was Angha a top prospect? I believe he was, he made his first team debut this season in the Capital One Cup. He was highly rated when signed a couple of years back along with Sead Hajrovic and the times I have seen him in various youth and reserve games he had been impressive and comfortable at that level. I think he is one that got away but it would be interesting to hear the view from the club and Arsene in particular if he regrets the loss of the player.

Personally I think the time is up for players like Craig Eastmond and Sanchez Watt; they have been given opportunities around the first team but have failed to advance their development to the level required. Their loan spells have produced mixed results and I would not be surprise to see them as former Arsenal player by the time next season starts. Chuks Aneke is another player who has had massive potential coming through the ranks and I feel that he may stay on with the club next season but it will be a make or break season for him. He has done well on loan at Crewe Alexandra this season but in all due respect he needs to be testing himself at a much higher level if he is to break into the first team. 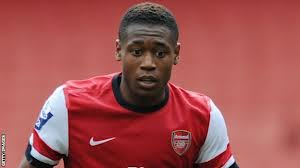 Successful loans don’t always equal a passage to the first team as the example of Henri Lansbury will show you. Despite a few outings for the first team the majority of Lansbury’s last few years at Arsenal seemed to be away from the club on loan. Although I wouldn’t class his departure to impatience, his time away meant that when opportunities presented themselves in the Arsenal midfield he was not around to take them.

It really is interesting to see how the project youth will take shape in the near future at Arsenal, there is undoubted quality coming through such as the likes of Serge Gnabry and Tomas Eisfeld but will those players have the patience to wait to compete with the likes of Arteta, Wilshere Cazorla for a start or fancy their chances of first team opportunities elsewhere? A lot of money is invested in the scouting system at the club and development of young players but at what point is the line drawn if players don’t hang around? Maybe the chance to unearth another Wilshere is worth cutting the loss on players just not at the required level yet.

3 thoughts on “Is Project Youth at Arsenal on the way out?”