The Arsenal passed their test at the weekend, a Saturday stroll ensuring 3 points on the table to keep pace with those around them. Now at the business end of the season there are no more easy games, each match regardless of the opposition is a potential banana skin and it was important that the disappointment of the game against Bayern Munich in the week did not have a knock on effect to the players.  I’ve had a day or two to digest the events of Saturday and thought I would share my thoughts and reflections with you this Monday morning.

Bit of a flat atmosphere in the Emirates

For a game that produced four goals for the Arsenal the atmosphere was quite subdued inside the Emirates. The weather was nice, an early goal was scored and I suppose the urgency within the match was quelled as soon as Olivier Giroud struck the opener. 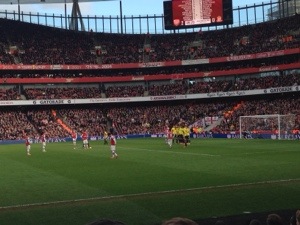 When you compare in contrast the electric atmosphere when Bayern Munich came to town it was like matching a 100 bpm Scooter track to anything sung by Norah Jones. In fairness there is hardly any bad history between Arsenal and Sunderland to spark the ire of the fans. Another reason for the atmosphere could be related to my next point.

By this I am referring to the timing of the Carling Cup Final next weekend. You could sense in the performance that Sunderland were content with getting through the 90 minutes injury free. You  would think that players would put in a good performance to ensure their name is on that starting eleven team sheet on cup final day but it has been evident year after year players just don’t want to take that risk and miss out altogether. Arsenal didn’t have to move out of 2nd gear on Saturday which you would think would lead to an event free afternoon, this moves on to my next point

With the lack of intensity in the game on Saturday the team still managed to suffer on the injury front. It is hoped players were replaced as mere precautions rather than anything serious.  Nacho Monreal was replaced at half time by Carl Jenkinson after receiving a kick on the foot in the first half; Laurent Koscielny then went off meaning Sagna had to cover in the center of defense with Matthieu Flamini covering at left back. Jack Wilshere was also struggling towards the end of the game meaning the backroom staff will be putting in some overtime this week to patch the players up ready for next week’s game at Stoke. The defensive injuries are the biggest worries as a Monreal injury would come at the worst time following Kieran Gibbs misfortune in the week. Vermealen is rumored to be returning to the side soon and he will be surely needed if any of the starting back four have any injuries longer term.

It was a special day in the memory of Dennis Bergkamp’s legacy as a player for Arsenal. The non-flying Dutchman’s statue was unveiled on the morning of the match to a very appreciative crowd. It’s always great to see former greats return to the club and one of such standing as Bergkamp certainly brings back the good feelings of where Arsenal used to be and could one day be again. He was fully deserving of his statue and was humble enough to dedicate such an honor to his team mates and the support of his wife and family. For those who could not make it to the unveiling he made an appearance at half time to the Emirates crowd to great applause and adulation.

Although the official reason was an injury to the German playmaker I am pretty sure Ozil was rested just to relieve some of the heat he endured in the past week. In fairness he has played a hell of a lot of football this season and the break could do him some good. Although he was rumored to be present at the Emirates on Saturday, Ozil still can benefit from having no football to affect him physically or mentally and start afresh next week. He still has the support of his team mates and the majority of fans despite what the tabloids say.

It was nice to see the Italian return to the Emirates as a more respected goalkeeper. Mannone has certainly seized his opportunity upon leaving Arsenal and has made himself the first choice in the Sunderland team. He has proved himself to be the goalkeeper he had the potential to be whilst with Arsenal but failed to build upon. I’m sure Gunner’s fans will back the keeper 100% next week in the Carling Cup Final as he remains popular amongst them. Mannone’s career advancement has surely acted as inspiration for our very own Lukasz Fabianski to seek pastures new. He has likely glanced over at his former rival with envy and aimed to seek similar success to boost his club and country fortunes.

2 thoughts on “Monday Reflections On The Arsenal”