Wembley here we come! After the dispatching of Everton yesterday in the quarter finals of the FA cup a trip to Wembley for the semi final now looms. Opponents will be decided today after the remaining three quarter final games are played.

One major obstacle in the shape of Manchester City could stand in the Gunner’s way of a second trip to Wembley in the form of the actual final. It is the utmost importance they are avoided in the draw today. That’s not to say Arsenal are not capable of beating Man City, that is every bit possible but to meet them in the final would make for a more fitting centre piece of the competition. I mean no disrespect to the other teams in the competition, they all hold a threat and recent history is likely to inspire any of the other teams that victory is certainly possible in a one-off game. Last season cup exits to Bradford City and Blackburn Rovers, not to mention that Carling Cup shocker against Birmingham City. These are all reminders that the level of the opposition does not equate to a textbook victory for the Gunners, anything can happen on the day.

Yesterday the possibility of winning a trophy became a distinct reality; under current evaluation the FA Cup holds the best chance for a trophy after Tottenham gift wrapped Chelsea three points in the Premier League game yesterday. The Chelsea result strengthened Arsenal’s position in the top four slightly however I would be a lot more content with the club’s focus being on catching the teams in front of them rather than thinking about what is going on over their shoulder from the teams playing catch up. The team owes it to themselves as much as the fans to give it 100% on all fronts until the end of the season. Priority and focus on the FA cup can be assessed a bit more once the club know who they are playing.

The fate of Arsenals destiny ironically lays at the hands of one of their former greats as Ian Wright has been granted the honour of facilitating the semi final draw alongside his son Shaun Wright-Philips. I’m pretty sure if Wrighty pulls Charlton or Sheffield united out of the hat (or bag) he may just get a statue commissioned to keep Dennis, Tony and Thierry company around the Emirates Stadium. If he pulls out Manchester City he may need to consider disabling his twitter account for a few days. 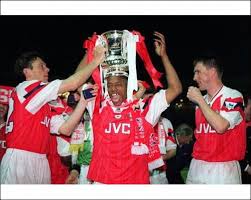 In all seriousness though it is what it is, whoever Arsenal draw in the next round they know what is required of themselves to get to the final and win that trophy. The draw today is at 4pm (GMT).

Possible opponents in the draw:

3 thoughts on “Wembley Awaits Arsenal, Who Will Join Them?”