So Sunday 1st July greets us with depressing news. News that our very own Jack Wilshere could actually be sidelined for longer than expected and any sign of a return may not be before September. The mirror paper reports his rehabilitation from the operation he had back in May would take up to 12 weeks and that would effectively rule him out of the start of the season. Not ideal as it would have been more beneficial if Jack had a full pre-season behind him making him ready for the new season rather than joining the first team well into the season and having to hit the ground running. Jack is so important to Arsenal and its future however can we afford to ease him back into the team; early season is so fast paced the risk to jack’s ankle with be very high.

With England in desperate need of a saviour to ignite a new dawn under Roy Hodgson it is very likely he will be thrown into international football at first opportunity.

Although this is quite worrying news for Arsenal fans to digest I am sure this information has been known to Arsenal management. What they have planned in light of this information is not known but there has to be a contingency plan in pace in terms of cover. As we learned with Aaron Ramsey last season having to rely on a player who has returned from a long term injury and throwing them straight into the deep end not only hurts the player but hurts the team also. Through no fault of Ramsey himself his contribution to Arsenal midfield was under the microscope more than usual due to our poor preparation and start to last season. 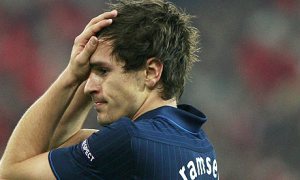 Arsenal fans wanted answers and Ramsey’s form was highlighted, with the loss of important personnel from our midfield that season Ramsey wasn’t the afforded the luxury of being eased back into the team. This is a similar scenario that could be faced by Wilshere for Arsenal and England. This situation has to be handled with the upmost sensitivity or we could risk losing the player longer or denting his confidence to critical levels if he doesn’t reach the high levels he set before the injuries as soon as possible. A year is a hell of a long time to be out through injury and ring rustiness is inevitable I just hope Arsene has everything under control.

In light of the sombre news we were all waving off Yossi Benayoun to pastures new. Could he have been able cover until jack is back up and running? Would Yossi himself be happy effectively keeping the seat warm for Jack until he is back to full fitness? It seems with the Jack news that our transfer business this summer will be far from over. Who has wenger got his eyes on to fill the void, will there be a promotion within. Could Henri Lansbury receive the opportunity to prove himself at last in the Arsenal midfield or will the returning Denilson play a part this season. Not to mention Francis Coquelin and Abou Diaby being in Arsene’s thoughts.

One player who seems to have fallen out of Arsene’s thoughts is Yann M’vila. It seems the young midfielder’s behaviour at Euro 2012 hasn’t gone down well with our manager. His reaction to a substitution in France’s game against Spain didn’t go unnoticed and may have harmed his chances of a move to the Emirates this summer. One thing Arsene doesn’t do is babysit troublesome souls, any sign of petulance and the front door shuts on that player. Will be a shame to lose out on a player we need though it will be important that the squad isn’t ego driven and actually has some togetherness.

With the transfer window now open we will see how the transfer dealings pan out before season start. We leave it into Arsene’s hands. Arsene knows…